Each year, during Cest is d’Best, some unusual things have arisen in the city – unusual items in ordinary places, or ordinary items in unusual places. Art installations present a festival décor every year and present particular creativity stories. This year, we have launched five public competitions involving more than a hundred artists. Installations are temporary intervention in the existing state of public places and present author’s contribution to the refinement of the architecture we live in. 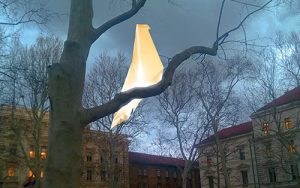 Free energy is omnipresent and one of the few who has captured it by the inventions and scientific experiments is definitely Nikola Tesla. In search of the new discoveries, a white dove was Tesla’s inspiration. For him, she was not just a pet but a symbol of clean, ubiquitous and free energy. This image is being revived through the artistic installation “Tesla’s Dove”. Derived as a sculpture that glows in the dark, here the dove represents a metaphor for energy as a source of life in the modern world, as transcendental extravagance and universal peace. With the purity of the geometric shape and the light that penetrates from the interior of the form, this work is a combination of spiritual and physical energy, which is present in every detail of life.
AUTHOR: PETAR POPIJAČ

Wooohooo! Happy 10th anniversary to you Pastel the Pavement! We love painting pastels on gray sidewalks and transform them into colourful promenades. Find us at Zrinjevac, greet us while passing by … Drawing with pastels are organized along the pavement of Praška ulica, and all it takes is a bit of imagination, a bit of preparation and a basket full of good will. Join us on Saturday, June the 2nd 2018, starting at 10 AM. This street painting festival is a free one-day event open to anyone who wants to express art, no matter how skilled or old they are.
AUTHOR I ORGANIZER OF THE PROJECT: MARIO VUKELIĆ 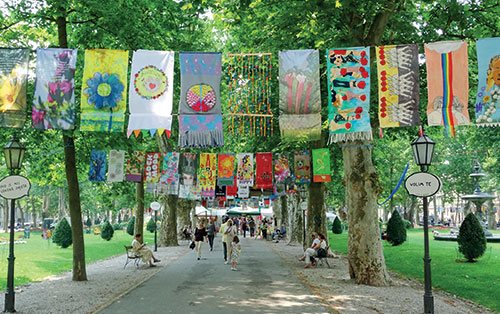 Traditionally, for the 10 years in a row, only this year in the Zrinjevac park, art flags created over the past then years by the distinguished artists from Croatia and abroad, have been exhibited. Work on the theme “LIGHT TO THE WORLD – HOMAGE TO TESLA” contributes to the special atmosphere during the festival, while also represent an artistic achievement. This year we received around 40 works by artists from: Bosnia and Herzegovina, Finland, the United States, Slovenia, Kosovo and Croatia. Marta Crnobrnja, Branko Hlevnjak, Marijana Paula Ferenčić, Marina Tenzer and Dijana Nazor will award three rewards and one contribution.
On http://ulicnifestival.weebly.com website you can see how the exhibition on Ban Jelačić Square looked like in the past years.
ARTIST GUEST OF HONOUR: JADRANKA FATUR
AUTHOR AND ORGANIZER: DIJANA NAZOR

LOOK AT ME – FASHION SHOW INCLUDING HIDDEN IR MESSAGES

A fashion show with hidden IR messages called “Look at me” will reveal to us the invisible messages, created by two authors at Flower Square on June the 2nd 2018 at 4-4:30 PM. Duplicate images are in the same layer printed on canvas based on the InfraredArt theory. The artists shall, in the visible spectrum of their paintings, reveal to the audience hidden, personal humorous or spiritual messages. Thanks to the new “Infrared Painting and Design” mode, such duplicate images require detection. IR hidden cameras can detect such messages on clothing although we are not even aware that they are around us. We invite you to be there and discover images as participant of the show in this special action.
CONCEPT AUTHOR: JANA ŽILJAK GRŠIĆ
IMAGES AND DESIGN AUTHOR: DIJANA NAZOR, NADA ŽILJAK
FASHION SHOW REPRESENTATIVES: SANJA TATALOVIĆ, ANTONELLA ŠANTEK, VERONIKA GAJŠAK, LEO MIŠIĆ I IVANA MARIJANČI 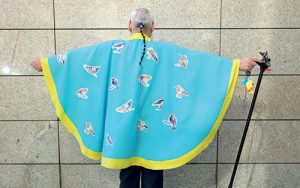 Galiot, the first Croatian walking gallery in its lineup on the mantle walls, this time painted in heavenly blue, took it on, and emerged among the citizens with a choice of paintings from two exhibitions of the young artists Korana Gjalski Filipović: Zagreb birds and Fairy Creatures. Painting represent skilled vivid and flowing crocs made in ink and pastels technique. Birds, as stories, are from the urban environment: painted individualized, they act as portraits of different birds, each with its own character. These characters are similar to humans, so with birds, or with each bird individually, each person can relate to. On the other hand, fairy creatures form a swarm of flying insects (from flies and dragonflies to butterflies and ladybugs) which, enlarged and spiritualized, seem really amazing.
CONCEPT AUTHOR AND ORGANIZOR: MIRKO PULJIČ GALIOT
GALLERY CURATOR: BRANKA HLEVNJAK

The drawing of children’s games hopscotch is presented in the form of a closed circle, in which seven hopscotch fields circularly repeating. The aim is to include observers as active participants creating a “happening” intended not only for children but also for adults who through this game awake inner child. “The Route/Put” will be represented in the form of drawing and video performances Ban Josipa Jelačić Square – Main Square, on May 31st 2018 from 5 till 7 PM and on Zrinjevac, June the 1st 2018 from 5 till 7 PM.
This work was created in 2010 and up until now had been introduced to Garis & Hahn Gallery in New York, the Centre for Contemporary Art Halle 14 in Leipzig, the Museum of Contemporary Art in Zagreb and the Osijek Summer of Culture.
AUTHOR: LJILJANA MIHALJEVIĆ 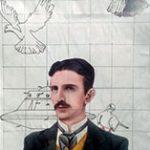 The installation awakens the memory of Tesla’s love for the pigeons and his great connection to nature. It is known that he sat in the park and fed the pigeons. White doves hang like movable items, and are painted with inspiration by traditional wooden toys of Hrvatsko Zagorje region, which are on the list of protected intangible heritage goods in the Register of Cultural goods of the Republic of Croatia, and also as of 2009 listed on List of Intangible World Heritage protected by UNESCO. The Hollow tree on Zrinjevac gets a wooden bench, and the “Tesla” bulbs are on the tree. Whoever sits on the bench, can feed the pigeons or rest for a moment, and maybe even get an idea of personal or professional progress.
AUTHOR AND ORGANIZOR: DIJANA NAZOR 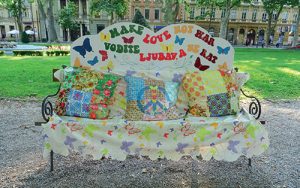 This year we will sit in the benches that invite us to the memory of hippies. On one of them is the symbol of the Woodstock festival, the bird that sits on guitar neck. We believe that it is a symbol and indeed represents a symbol of hope that music and art in general can convert us to peace and love. “Make love, not war” was the slogan of the hippy movement and therefore “deserves” to be mentioned. “If all the people in the world…” would made love, not war, we would really live in heaven on earth. The patchwork of colours and a mandatory sign of peace on the pillow on the bench, remind us of the joy, diversity and freedom of visual expression. The idea for the name of the third bench is related to the song Crosby, Stills & Nash band “Almost cut My Hair”. Long hair was extremely important to the hippies and to wear it was an important sign of recognition and acknowledgement, something like giving yourself to the world.
AUTHORS AND CREATORS: JADRANKA PETRAK and ASSOCIATION„LUMATEMA DAJA” from OSIJEK

ZRINJEVAC RESERVE FOR THE DANGEROUS AND ENDANGERED ANIMALS

Bad news for female White rhinos – the last male specimen died a few months ago. So there’ll be no more little White rhinoceros, regardless the demographic policy you’re running. The representatives of other endangered species from different parts of the world will will be present at the memorial service. This interplanetary gathering will happen on the Zrinjevac lawn on the Reserve for rare and dangerous animals.
Drop by and comfort these lovely mugs and do something for them to be with us as long as possible.
AUTHOR OF THE PROJECT: ZLATKO PETROVIĆ

A gang of wandering artists heard that Zagreb is rich in intriguing faces. Come and show them whether they have a point! Meanwhile, try modelling career on one sketch, and for the prize you’ll get a portrait that would make even a Dorian Gray envious. You get all that for a little bit of kunas and a lot of fun. You are all welcome: young, old, middle aged, a carefree, fuzzy, happy or sad. Every day at Zrinjevac from 11 AM to 7 PM. You will recognize them by the chic French cliché, large wooden painting stands and hands all out of paint. 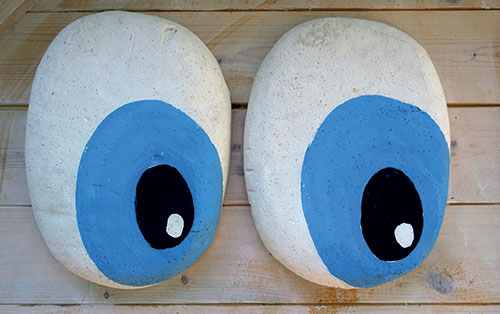 WALLS HAVE EARS, AND THE TREES EYES

For couple of years now, at the time of the Cest, Zrinjevac trees observe. We’re almost used to it, we are looking at them, and it seems to us that these beautiful plane trees are each year watching with more sympathy. They are not complaining that we have briefly turned them into the comic or cartoon characters, and as if they are pleased that they have become part of the Cest’s children fairy tale.
INSTALATION AUTHORS: VJERAN ČENGIĆ and BRANKA RADONIĆ